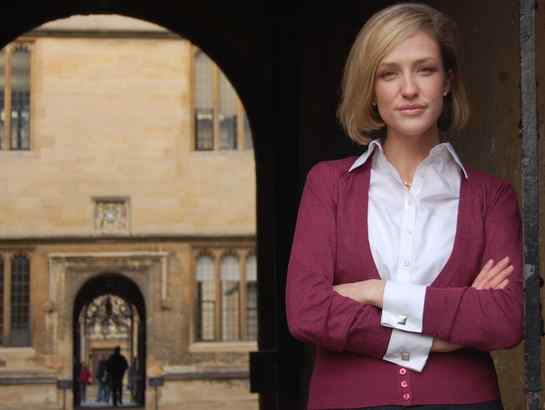 ELIZABETH BROWNSELL
Lorianne Updike Toler found the draft among James Wilson's papers at the Historical Society's vault, rather than with other drafts of the Constitution.

Early draft of the Constitution found in Phila.

Researcher Lorianne Updike Toler was intrigued by the centuries-old document at the Historical Society of Pennsylvania.

On the back of a treasured draft of the U.S. Constitution was a truncated version of the same document, starting with the familiar words: "We The People. . . ."

They had been scribbled upside down by one of the Constitution's framers, James Wilson, in the summer of 1787. The cursive continued, then abruptly stopped, as if pages were missing.

A mystery, Toler thought, until she examined other Wilson papers from the Historical Society's vault in Philadelphia and found what appeared to be the rest of the draft, titled "The Continuation of the Scheme."

The document - one of 21 million in the Historical Society's collection - was known to scholars, but probably should have been placed with the other drafts, said constitutional scholar John P. Kaminski, director of the Center for the Study of the American Constitution in the history department at the University of Wisconsin-Madison.

"This was the kind of moment historians dream about," said Toler, 30, a lawyer and founding president of the Constitutional Sources Project (www.ConSource.org), a nonprofit organization, based in Washington, that promotes an understanding of and access to U.S. Constitution documents.

"This was national scripture, a piece of our Constitution's history," she said of her find in November. "It was difficult to keep my hands from trembling."

As other researchers "realized what was happening, there was a sort of hushed awe that settled over the reading room," Toler said. "One of them said the hair on her arms stood on end."

Two drafts of the Constitution in Wilson's hand had been separated from his papers long ago. One of them included the beginning of still another draft and was apparently seen as part of a single working version, instead of a separate draft.

Toler said "The Continuation of the Scheme," including its provisions about the executive and judiciary branches, completes that draft, making it a third.

She "found a document that was sort of buried in its right place, but not taken out by an archivist for special treatment," said Kaminski, the constitutional scholar. "This is a valuable document. It is in Wilson's hand, and it was in Wilson's papers, where it should have been."

With so many historical documents "going online, you don't have that kind of discovery in an archives," he added. "I can understand why [Toler] would be excited."

For Nathan Raab, a member of the Board of Councilors of the Historical Society, the documents are reminders "of the great depth of the archives there and the emotional power of holding a piece of history in your hand."

"The Continuation of the Scheme" and countless other documents had been evaluated by scholars decades ago before being carefully filed away at the Historical Society at 13th and Locust Streets.

"Perhaps this one should have been placed with the other drafts," said Lee Arnold, senior director of the library and collections at the Historical Society. "We may do that, but no decision has been made.

"We want to look at it more thoroughly," he said. "In the end, though, [the document] is perfectly fine."

The drafts of the Constitution in Wilson's hand were removed from his other papers and placed in Mylar and acid-free folios and have been occasionally displayed.

"The Continuation of the Scheme" document "was safe and preserved, but not given the prominence," said Kaminski, chief editor of the book The Documentary History of the Ratification of the Constitution.

"Wilson was a great man and one of the great founders and should be respected for that," he said. "We owe him our gratitude for the role he played."

Wilson, who lived in Philadelphia, was selected July 24, 1787, with four other members of the Constitutional Convention to serve on the Committee of Detail.

The committee - which also had John Rutledge, Edmund Randolph, Nathaniel Gorham, and Oliver Ellsworth - used 28 resolutions passed by members of the convention to flesh out the Constitution.

They finished their work and presented it Aug. 6, 1787, to the Constitutional Convention. It included Wilson's famous "We the People" beginning.

Seeing the framers' drafts and thought processes leading up to that point was especially thrilling to Toler, who is studying at Oxford University, where she is seeking a doctorate in U.S. history and specializing in constitutional legal history.

"The Constitution may be the most important document written in modern history," said Toler. "It is the longest-standing written constitution and the basis for most of the constitutions in the world."

After finding the draft, "I felt like an actor in the movie National Treasure, but [actor] Nicolas Cage was nowhere to be found," Toler added.

If you see an objectionable post, please report it to us using the "Report Abuse" button.
More About Philly.com comments.

About your comments: These comments are monitored by Philly.com staff. We reserve the right at all times to remove any information or materials that are unlawful, threatening, abusive, libelous, defamatory, obscene, vulgar, pornographic, profane, indecent or otherwise objectionable.
Personal attacks, especially on other participants, are not permitted. We reserve the right to permanently block any user who violates these terms and conditions.
Register to comment
Why are we asking you to register? We've made some changes to the Philly.com commenting system to increase the quality of the user experience and dialogue, and reduce the number of inappropriate or offensive posts. You're now required to have a registered username and account before adding a comment. This will improve the comments for everyone. We apologize for the inconvenience. Join the conversation!

Please note that your registration will not be considered fully complete until you confirm by following the link we have provided in a confirmation email that was just sent to $cms.subscriptionUser.email.

Until you follow the link in that confirmation email, you may log in but will not be able to comment, so make sure to check your inbox for a message from register@philly.com.

A celebration of 80 years of marriage
Love of a Lifetime Wedding Giveaway
Pilot was ‘calm’ during turnpike landing
Anti-pigeon-shoot group finds price is right to fight
Not much promise in free-agent market
Phillies prospect arrested in Louisiana
Paul Domowitch: For Asante, another game of touch football at Pro Bowl
Eagles: Stay or Go
Olympian Allison Baver
Mathieson tries epic comeback with the Phils

Don't Replace Your Bathtub -- Reglaze It!!